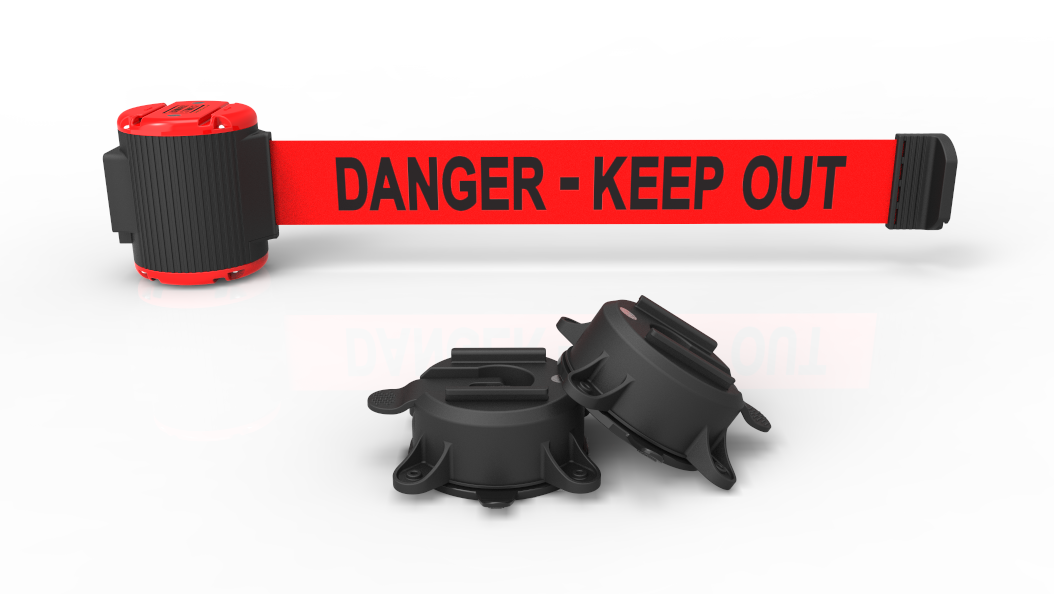 Safety and Hazard Communication Barriers will limit confusion and increase productivity and safety at your job site.

For some small businesses, ensuring the safety and health of their employees can be a challenge. Limited resources, difficulty meeting regulatory requirements and cost concerns associated with numerous facets, including workers’ compensation, all present problems.

To compound these problems, research has shown small establishments have higher rates of workplace deaths and serious injuries than larger establishments.

This tendency toward higher injury rates raises the question of how regulatory agencies and small businesses alike can effectively improve safety at small worksites.

Recently, OSHA’s aggressive stance on enforcement and pursuit of new or updated regulations has drawn ire from some members of the small business community.

“The economy is down, companies are hurting, and you’re going to put them out of business,” David Landis said. As the safety compliance coordinator for Lancaster, PA-based Keystone Wood Specialties, a wholesale wood composite manufacturer employing 53 workers, Landis said OSHA should look at new or updated regulations, but in a cautious manner.

By and large, small businesses – defined by the Small Business Administration as those with fewer than 500 employees – have a higher regulatory compliance cost than larger firms, according to a 2010 SBA report.

The report, “The Impact of Regulatory Costs on Small Firms,” found that businesses with fewer than 20 employees pay about $250 more per employee for occupational safety and health and homeland security regulations than firms with 500 or more employees.

“The costs of regulations are just as real and significant for small businesses as are taxes, for example,” said Raymond Keating, chief economist at the Oakton, VA-based Small Business & Entrepreneurship Council.

Ryan Spies understands this burden. At Janesville, WI-based Rock Road Companies, Spies is the safety manger for 75-130 workers at the asphalt company’s numerous locations, including a dozen quarry pits. Spies has to stay current with regulations from multiple agencies, including OSHA and the Mine Safety and Health Administration, and finds it can be a struggle.

“At one time, you thought you were doing everything you were supposed to. Six months later, you have a whole new set of rules to follow,” he said.

It can take years for a small company to buy the necessary equipment to get into compliance with a new regulation, Spies said. That cost of buying new equipment or modifying existing equipment to comply with new regulations has to be built into the company’s overhead.

In addition to costs, a lack of experience or resources – including being short on safety professionals – can hinder a small company.

Typically, small businesses only can afford to have one person with a “safety professional” title, according to Spies. Sometimes, that person has to take on additional responsibilities outside of safety.

At Keystone, Landis oversees OSH, the maintenance department and human resources. “There’s a lot of companies our size or smaller; they can’t afford to be paying a person just to do safety,” he said. However, Landis does not particularly see this as a disadvantage. Larger companies may have separate directors for these various departments, which Landis said could lead to communication gaps.

Not everyone may agree. Spies dislikes taking on HR-related tasks because he sees his primary role as holding workers accountable for OSHA compliance – not being tasked with hiring and firing.

A lack of experience in dealing with safety issues may be another problem for small businesses. John Mendeloff is director of the RAND Center for Health and Safety in the Workplace, a Pittsburgh-based research institution. Mendeloff said some data suggests smaller establishments may not know as much about keeping a worksite safe.

These experiences would include workplace incidents and injuries. A larger company may see a greater number – but not necessarily a greater rate – of workplace injuries, allowing it to figure out how to best prevent future incidents.

Workplace incidents can have a much greater negative effect on a smaller company than on larger businesses, according to Spies. “Smaller companies don’t have the ability to make as many mistakes,” he said.

A single workplace safety mistake could mean a higher workers’ compensation insurance premium for a small business, Spies said, which could make it harder for small businesses to stay competitive.

Nearly everyone who spoke with Safety+Health magazine for this article agreed that most safety regulations generally are a good and necessary thing, but many of them expressed concern about how safety agencies go about implementing new rules.

OSHA recently was criticized for seemingly not working with industries when developing two proposals – a revision to its noise standard interpretation and the addition of a musculoskeletal disorder recordkeeping requirement. Confronted with a backlash over the proposals, the agency withdrew the noise interpretation and temporarily withdrew the MSD recording rule while it conducted outreach efforts, including hosting teleconferences.

Prior to the withdrawals, critics suggested OSHA skipped a significant step by not following requirements under the Small Business Regulatory Enforcement Fairness Act. The act requires agencies to review whether planned rules will have a significant economic impact on small businesses. Although the proposals OSHA was pursuing technically were not new rules, some experts said the agency should have convened a SBREFA panel to solicit input from small businesses.

“I think OSHA should be embarrassed [for] viewing SBREFA as a challenge and not a benefit,” said Tom Sullivan, an attorney with Nelson Mullins Riley & Scarborough LLP who runs the firm’s Small Business Coalition for Regulatory Relief.

Sullivan praised the agency for conducting outreach efforts on the MSD rule, but suggested OSHA could have saved time if a SBREFA panel had previously been conducted.

It is a good thing for OSHA to solicit comments from stakeholders on issues early on, Mendeloff said, but doing so adds to the many procedural hurdles the agency must overcome to promulgate a rule. The rulemaking process is a “mess,” he said, and, as a result, it has become difficult to issue regulations in a timely manner.

But Sullivan maintained that while the process is time-consuming, it is beneficial. “The alleged pain of added bureaucracy is minimal compared to the hindsight,” he said.

The incentive to create a safe work environment may not be connected with a desire to comply with federal safety regulations, however. As Spies suggested, workers’ comp rates are affected by on-the-job incidents and can have a direct impact on a small firm’s ability to conduct business and stay competitive.

“All small businesses have to have workers’ comp insurance, and that, believe it or not, is more expensive than health insurance for us,” said Mike Fredrich, president and owner of Manitowoc, WI-based MCM Composites.

Workers’ comp insurance provides a discount for firms with no claims and is a great incentive for small companies to pursue a safe working environment, according to Fredrich. With regulations, he said, OSHA can go to virtually any worksite and find some type of violation to cite.

Faced with criticism of OSHA’s enforcement policy, agency administrator David Michaels has promoted the agency’s consultation programs aimed at small businesses.In testimony before a House subcommittee on April 14, Michaels noted that OSHA’s On-Site Consultation Program conducted more than 30,000 visits last year. The program is run by the states and provides free safety and health evaluations to small businesses with 250 or fewer employees.

Other cooperative safety programs recognize small businesses for achieving “excellence,” including the Safety and Health Achievement Recognition Program and the Voluntary Protection Programs.

“We believe that no employer, large or small, should have difficulty providing a safe workplace because they can’t get accurate and timely information about how to address workplace safety or health problems, or how to understand OSHA standards,” Michaels testified. “We are committed to providing access to the information employers and workers need.”

Keystone Wood Specialties has been in SHARP since 2003, and Landis said the company works hard to maintain the status. The program recognizes small employers who operate an “exemplary” safety and health management system. “I really think more people should take advantage of it. That’s what you want them to come in for, to make sure you’re in compliance,” he said.

Consultation programs have some drawbacks, however. Spies has not worked with OSHA’s programs, but has found that MSHA-run assistance programs lack strategies for his industry.

Based on conclusions from a study on OSHA’s consultation program, Mendeloff said he was surprised to learn the agency’s consultations focused almost exclusively on standards violations, which are not necessarily the cause of most injuries. Even still, Mendeloff suspected the programs are helpful, but said their benefit may be limited. “Currently, consultation is voluntary and requires the firm to request a consultation. Those are clearly motivated firms,” he said.

Mendeloff suggested that small worksites with evidence of safety problems – such as high modification rates on their workers’ comp – be subject to mandatory consultations in which they are provided information on how to improve safety at the site, but are not cited for deficiencies. A worksite that refuses the consultation could then be targeted for an OSHA inspection.

Calling the On-Site Consultation Program “hugely successful,” Sullivan took issue with the suggestion of mandatory consultations, saying reconfiguring the program to draw in people who otherwise would not use it is not a good enough reason to make the change. “The people who want to harm their employees are going to do it, regardless of what the government is doing,” he said.

The Small Business & Entrepreneurship Council questioned OSHA’s ability to assist businesses and suggested that a mandatory consultation program would open another avenue of additional regulatory costs and burdens. “Effectiveness is always a big question, as well as the very legitimate concerns businesses have when they hear ‘I’m from the government and I’m here to help,’” Keating said.

Several studies in the past have provided evidence that small establishments have higher death or injury rates than larger establishments.

Even with all the differences and challenges small businesses encounter in ensuring a safe work environment for employees, some stakeholders feel the biggest hurdles are identical to those faced by large businesses.

To Fredrich, the basic safety principles are the same for both small and large businesses: developing safety awareness in the workforce, eliminating all potential problems and not allowing problems to go unfixed. “There is no magic safety bullet or safety equipment that you can buy,” he said. “It comes down to awareness and the little things.”

Banner Stakes is an effective, reusable and portable barricade system that provides unique safety benefits. The Banner Stakes system sections off areas to reduce liability and convey warnings which eliminate confusion, increase productivity, and enhance safety. Banner Stakes is the industry standard for quality and dependability. A must-have for any work place where safety, savings, and the environment are a concern. Banner Stakes is the leader in portable safety barricades for any industry including Automotive, Aviation, Industrial, Manufacturing, Hospitality & Gaming, Janitorial & Sanitation, MRO, Construction, Healthcare, Crowd Control, Safety, Equipment Maintenance, Warehousing, and Traffic Control.

Want to know how to purchase our products? SHOP NOW!

Is your workplace prepared for electrical safety? Safety and Hazard Communication Barriers will limit confusion…

A Review Of The Hazard Communications Standard

Banner Stakes' products can help increase the efficiency of your company's hazard communication program! The…

Welcome to our new Blog. Here you will find product showcase posts, updates to our…